Torquay hosted over 5,000 Young Farmers this weekend as members travelled from across the country for the National Federation of Young Farmers’ Clubs annual convention.

The National Federation of Young Farmers’ Clubs (NFYFC) is one of the largest rural youth organisations in the UK.

It heads a nationwide body of 662 Young Farmers’ Clubs (YFCs) in England and Wales dedicated to supporting young people in agriculture and the countryside.

Bars and clubs in the town had been planning for the event over the past six months to ensure they were ready to give the young farmers a weekend to remember.

The busiest venue in town was The Green Ginger, which was at capacity by mid-morning each day with queues lasting for hours. The Wetherspoons pub had a record weekend, beating its target by Sunday morning.

Guest of Honour was George Grant from Lincolnshire who was crowned Britain’s Sexiest Farmer. George arrived in Torquay on Friday morning with girlfriend Lucy. 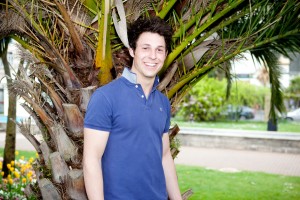 George said “It’s my first visit to Torquay and I’m really enjoyed the weekend. As soon as we’d checked into our hotel we headed straight into the town centre.”

He was unaware of how much press coverage he had received since winning the title.

All the staff across the town’s nightspots deserve huge congratulations for their hard work over the three-day party, with estimates of over £3 million of revenue brought into the local economy.