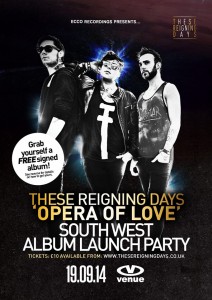 We’ve got one hell of a launch party to tease your ears with, bringing the Southwest edition of the album launch to you with a jam packed evening TRD style. Large sounds, pulsating lyrics and a stage & light show like no other.

Not to mention that we’ve got the exclusive showing of our new track ‘THRONES’ produced by Grammy Award winner Ade Bushby (Foo Fighters/Muse).

Two years of continual touring will make or break a band. For Devon’s These Reigning Days it looks to be the former. Life on the road seemingly suits this ambitious trio, and there is a perfect symmetry as the band returns to where it all began when they played their first ever big gig supporting Metronomy in the 1,000 capacity Venue nightclub in Torquay. This time they return in their own right to celebrate the launch of their debut album “Opera of Love” The single of the same name was used earlier this year by the BBC throughout their coverage of the winter Olympics. In the last couple of years, the band’s festival appearances include Glastonbury, Hop Farm, Liverpool Sound City, Volksfest, Musexpo LA and Boardmasters, as well as an appearance in front of 60,000 fans at Milan’s San Siro Stadium, which consequently nudged their track ‘Too Late’ to the top of the Italian charts and a main stage appearance at The Polish Woodstock in front of several hundred thousand. Last winter they supported The Feeling in The Alps and in January they played to a 15,000 strong crowd in Warsaw.

Tickets are £10 in advance and can be purchased by visiting our website www.TheseReigningDays.co.uk.