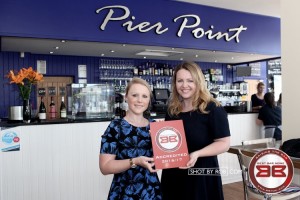 Both venues were recognised for their outstanding performance.

Supported by the Home Office, Best Bar None is a nationwide scheme which promotes responsible management and operation of alcohol licensed premises.

National Co-ordinator Mick McDonnell who carried out the assessments said “It’s absolutely fantastic to see the pubs and clubs of Torquay stepping up and embracing the challenge of completing a Best Bar None assessment. Especially independently run businesses like Pier Point and Prestige who both did exceptionally well.

“Having safe, well run, legally compliant venues in Torquay, can only enhance the customer experience. In time this could help to reduce alcohol related crime, increase footfall and sales which means Best Bar None is a win win for everyone involved.”

General Manager of Pier Point Kelly Widley said “It’s an absolute privilege to win this award that publicly recognises venues operating to the highest standards. We are delighted. It’s a testament to all the team here at Pier Point and such a great scheme for the area.”

Anthony Jones, Managing Director of Prestige added “After taking over Prestige with my business partner back in February we have done a lot of work to bring standards up to the level we both are happy with when running a business. Best Bar None seemed a fantastic opportunity to be a part of.  Something which would encourage all local operators to raise their games individually and also work together to meet a set guideline of standards – so we embraced the scheme. A great team effort was made for this and I can’t thank all the staff enough.”

The Torquay trade-led scheme is actively supported by industry partners including Bays Brewery, Patronus Security, Torbay Council, Devon & Cornwall Police, Torbay Street Pastors and SHOT BY ROB. They will be holding a high profile awards ceremony with category winners and overall winner at the end of November.