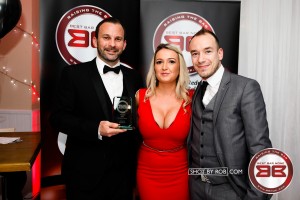 Throughout the summer licensed premises that have taken part in the BEST BAR NONE scheme have been assessed and accredited in addition to being nominated for a number of award categories at their awards night, which was held at Pier Point on Tuesday 29th November.

100 guests including owners, operators, suppliers and representatives of the Police and licensing authorities attended the glamorous event.

Supported by the Home Office, Best Bar None is a nationwide scheme, which promotes responsible management and operation of alcohol licensed premises.

Winners on the night were:

At the end of the evening Jim Parker, Editor of the Herald Express presented an award to Trevor Staveley of Torbay Street Pastors for Outstanding Community Contribution, The TREVOR Award –Trevor Really Encourages Venues Operating Responsibly!

Prestige Cocktail Club walked away with the most awards on the night. Anthony Jones, Managing Director said, “We were hoping to pinch one award but to go away with three was just amazing.  We have such a small venue here and to come away with ‘Best Late Night Venue’ against all the giant operators on the Harbour was a massive shock. Best Bar None has brought the Police, Council and operators all together for the first time in ages, which is hugely positive.

Overall winner was Pier Point Restaurant & Bar. Kelly Widley, General Manager said, “We are absolutely thrilled to win the Best Overall Winner Award amongst such highly esteemed competition. It’s recognition for all the hard work and commitment to excellence from our Pier Point family. I am personally very proud of our team, what we have achieved to date and our exciting plans for the future. This award represents we have a fantastic foundation in place whilst we reach for the stars!”

Emma Gibson, Torquay Best Bar None’s Chair added, “It was great to sit with other licensees on the other side of the bar for a change and celebrate the achievements of the town’s nightlife operators. I had a fantastic team working alongside me who helped put the night together with everyone who attended saying what a great night they had.”

Award winners were presented with a trophy and certificate having been scored based on their assessments, mystery shopper visits, an online poll and members votes.